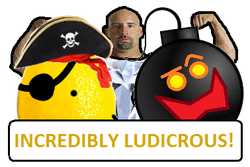 Incredibly Ludicrous! is a comic created by real people in the real world that began production in 2013. It is a spin-off of the highly successful Wikizilla: Rulers of Wiki comic and follows the adventures of The Ludicrous Bad-Doing Trio, a group of villains consisting of Captain Limon, Diamond Man and Bombalino. The main storyline of the series involves the gang slowly transitioning into heroes as they realize they are the only ones who can save their new home from the other villains that plague it. 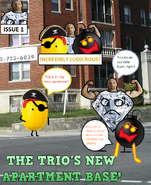 The trio move into their new a̶p̶a̶r̶t̶m̶e̶n̶t̶ base so that they can begin their planned reigned of terror. 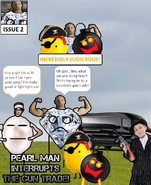 Pearl Man introduces himself to the trio as he interrupts their gun trade!
Add a photo to this gallery
Retrieved from "https://mosufan2004.fandom.com/wiki/Incredibly_Ludicrous!?oldid=3744"
Community content is available under CC-BY-SA unless otherwise noted.