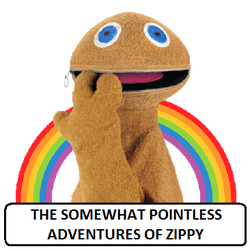 The Somewhat Pointless Adventures of Zippy is a comic created by real people in the real world that began production in 2011. It is a spin-off of the highly successful Wikizilla: Rulers of Wiki comic and follows the adventures of Zippy, the son of Deathrock9 and Rita. The main storyline of the series involves Zippy teaming up with Fox Mulder to search for the aliens that wiped his mind and stole his memories.

Retrieved from "https://mosufan2004.fandom.com/wiki/The_Somewhat_Pointless_Adventures_of_Zippy?oldid=3654"
Community content is available under CC-BY-SA unless otherwise noted.