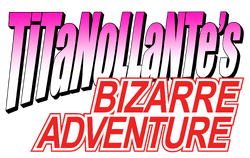 Titanollante's Bizarre Adventure is a comic created by real people in the real world that began production in 2015. It is a spinoff of the immensely-popular comic series Wikizilla: Rulers of Wiki that chronicles the never-before-seen adventures of the ex-Wikia Star.

The comic may contain overarching storylines, but is mostly a collection of separate events happening over a timeline.

Retrieved from "https://mosufan2004.fandom.com/wiki/Titanollante%27s_Bizarre_Adventure?oldid=5210"
Community content is available under CC-BY-SA unless otherwise noted.